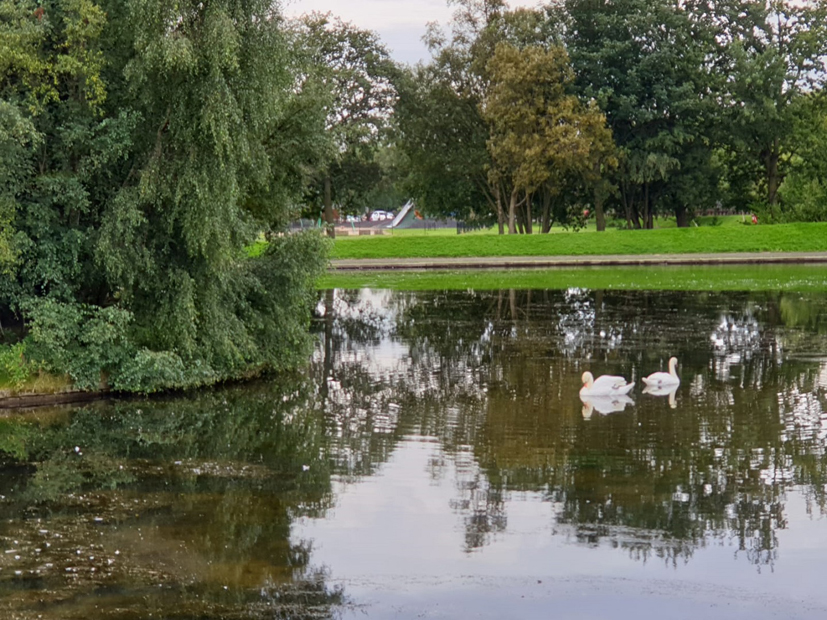 Well, the 2nd weekend is upon us and it was to start with more bloody walking. Joe goes swimming on Saturday mornings and thus Linda and yours truly walked to the supermarket to do the shopping and where Joe would meet us.

On our journey to the Supermarket, we passed many old memories. Like the Swannie Ponds, where one winter night and when it was frozen, Dave and Fred decided to walk across it and it ended in them falling through the ice. Luckily for them, the ponds are only knee-deep., so they were only soaked up to their knees.

Another landmark is, of course, the D.C. Thompson factory, where they once produced all the comics, (like The Beano, Dandy, Bunty, Victor etc) for the U.K. To be truthful, in this day and age of computers and downloads, I am not sure if they are still made.

In the supermarket, I wanted to get some beer for that evening. I managed to score my favourite French beer, I drunk a lot of it while I lived there and, of course, my favourite beer out of a can McEwans export, I also needed a Wok for cooking the mince for the lasagna. I got everything I needed.

We came home and it was time for me to start preparing the Lasagna for the evening. Linda’s son Lee and his lady were coming to dinner. I have made this so many times, I now make it from memory, but because I am used to the Dutch name to the products, I had to google a few product names.

I thought after that and after all my walking during the week, I would have a short nap before trying to watch the Dundee United game on the internet. I was due to go through to the game, but everyone I was hoping to go with had other plans, so I was destined to watch it at home. Well, bummer, we couldn’t get any film of the game, so I returned upstairs to listen to the game on Arabzone.

Another good performance and a win, still top of the league and now I am now even more excited about the derby next Friday and I predict 4-0 United win.

The evening was nice, but to be truthful, I was knackered from that week of walking and when I was happy when I finally got to bed.

Off to the Beach

Yes, Dundee has a beach. Broughty Ferry is a beautiful area of the city, with stunning buildings and a castle and of course the sandy beach.

Joe was off to Parkhead to see Celtic and Linda said she would drop me off nearer to the Ferry (what we Dundonians call Broughty Ferry), so I wouldn’t have so far to walk

Well, it was another hot day, W.T.F. is going on here, so we stopped off at Asda so that I could pick up some decent shorts and maybe a cheap shirt. I was successful. So Linda dropped me off, she went home and I headed towards the shoreline.

Is a beautiful day, I am walking through a beautiful part of my hometown and I know at the end of the journey I will have a pint in one of the best bars in the city the Ship Inn.

I even managed to persuade myself to have a wee paddle in the Tay. I was expecting it to be freezing, but it was actually quite warm, so it was nice to stand with my feet in the Longest river in Scotland, The River Tay, many places lay claim to the river, but everyone knows that it really belongs to Dundee

The views across to the Kingdom of Fife on this beautiful day are like in a fairytale, with a light mist covering the river

I walking around the picturesque centre of the town and I met an old friend of my family. I think I have known Linda Peoples all of my life, as our mothers were close friends. It was nice to meet her and her new man.

I said my goodbyes and headed, first to the chemist, because I forgot to bring deodorant with me and due to the heat I was starting heat up. It was then I headed for the Ship Inn and one of the best pints in the city.

I had the privilege of meeting, chatting and drinking with a Welsh rugby player and his Scottish father-in-law and it was a very nice afternoon and we even watched the cricket.

after they left, I ordered a taxi to leave the beautiful Broughty Ferry and head up the Fairmuir Boys Club and meet Joe.

I arrived and headed for the bar until Joe came in, we listened to the band, yes most know my views on cover bands and especially club bands, but that’s another story.

we had many Shandy’s and again I met new people, which is always nice. I thought we would be heading home straight after closing, but Joe wanted to go to the Karaoke, so we headed up to Whitey’s bar.

Whitey’s is a bar we used to frequent after United games. It was during the time that the bars would close between 2.30 and 5 in the afternoon. So every week we would be at the door of the bar around a quarter to 5 and we would knock on the door in Morse code. The barman would go apeshit and say just knock once, you b@st@rds…every week the same joke and every week the same reaction…classic

So we were back in Whitey’s, which I must say has been modernised to look really nice. Joe did his thing and sang a few songs. Even I did my turn, but by this time I had had enough beer and was not drinking rum/cola. So then you know it is time to go home.

And so we headed home and another weekend had passed, tomorrow the begin of the 2nd week and more fun. With a visit to Perth to look forward to and don’t forget the derby, so lots to do.