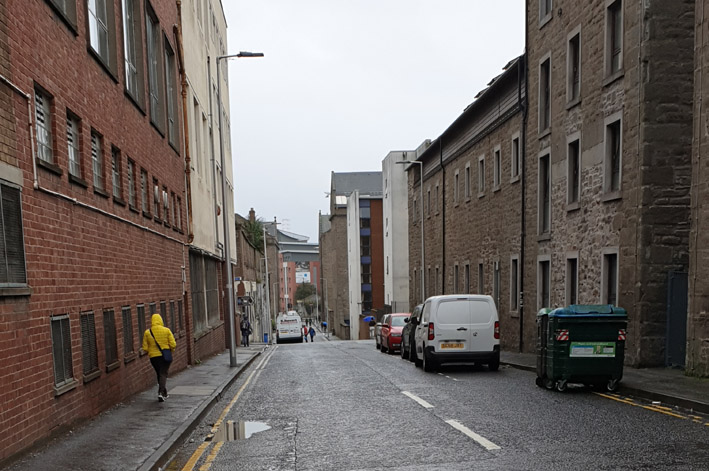 Well, after the drink and the early night, I was actually feeling quite good. After a light breakfast, I decided it was time to act like a tourist in my own hometown.

So I decided to go to the Jute Museum at Verdant Works. In my early years, I was an apprentice as a mechanic in the Jute world. The museum is a brilliant introduction to the history of Jute Industries. I will always have a soft spot for the smell of Jute, it brings back many happy memories.

After spending lots of money on the souvenirs, I headed back to the hotel room with my goodies. After freshening up, I headed back into town for something to eat. I also wanted to get some snacks to nibble on in my room.

So I ventured into town, I wanted to go to the Wellgate Centre. This is a shopping centre that used to be buzzing, but as I pass through it, nothing but shops boarded up and it is a sad sight.

I went up to see the famous Wellgate Centre Clock. This you have to see on the hour and half hour. but since I was there at the wrong time, I will return during the week.

I did some shopping in Iceland, which is strange because I thought I was in Dundee…LOL…I visited the ‘Oor Wullie Bucket Trail’ shop. I will go back during the week, as they had some really cool ‘Oor Wullie’ stuff.

I walked slowly through the town, passing the University, which is slowly becoming massive and it is where the band ‘Snow Patrol’ were formed. I also passed the Courthouse, no never been inside. I think I will return during the week with the camera and try to get some cool photo’s.

I spent most of the afternoon relaxing, well I am on holiday and I can do what I want. Around 3 Murray phoned we were to meet with Nicola (Andy Mac’s daughter) for a bar lunch. In a bar called ‘Trades Bar’, great food and great beer, so the start of the evening was a success.

I haven’t seen Nikki since she was knee-high to a grasshopper and she is now 40, Good Grief, that makes me feel old.

Well after dinner we parted ways, Nikki went home to Glasgow, tomorrow she has a Foo Fighters gig to go to, Murray went into town to meet other people and check out live music.

I have arranged to meet up with Murray tomorrow and to see a band, in which my Facebook mate Bob plays bass.

…and so the big surprise. Joe’s 60th birthday party. He, of course, knew I would be there, Linda my cousin didn’t. So I sneaked into the party and luckily Linda had her back to the door, so I could walk up to virtually behind her. Joe saw me and pointed to a seat next o her, so I sat down and said nothing. I think I sat for about 30 seconds until the lady next to Linda shouted “Steven” and Linda shocked turned around. Well, tears were flowing, I am not sure if the were of joy or disbelief LOL.

What a brilliant evening, yes they had me dancing and that is something I don’t usually like doing. After a few hours of merriment and alcohol. Alison (Linda’s ex sister in law) and her man dropped me off at my hotel. It was a nice day/evening and I think I made Linda happy.

..and so we head into the weekend and hopefully more fun stuff

Have a great weekend, folks